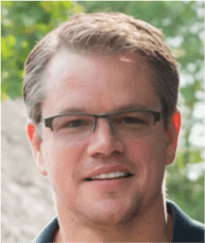 Academy Award winner Matt Damon is an actor, screenwriter, producer, and humanitarian, who has garnered international acclaim for his work both on- and off-screen.

Inspired during international travel with his family throughout Mexico and Guatemala as a youth, Matt has long been devoted to environmental and social issues. Learning about the immense challenges of accessing safe water and sanitation in Sub-Saharan Africa, Matt was inspired to create the H20 Africa Foundation. In 2009, he teamed up with Gary White to merge their organizations and launch Water.org, and in 2017, to create WaterEquity.

For his work with Water.org, Matt and WaterEquity co-founder Gary White were recognized among TIME’s 100 most influential people in the world. He also received the Crystal Award from the World Economic Forum and the Environmental Media Award from The Environmental Media Association. Matt has become one of the world’s experts on water and sanitation issues through a decade of participation in his organizations’ work, including site visits to multiple countries, strategy development, advocacy, and engagement with institutions such as the World Bank and the World Economic Forum.